Manchester United have always been struggling to pick the perfect strike partnership this season, with Hernandez adding competition to the striking department, so let’s look at the stats.

32 appearances, 13 goals in all competitions for the Englishman. But this season can be dismissed as an off form season for the former Evertonian. But he will certainly be remembered for his incredible overhead kick against Manchester rivals, Manchester City.

His physical presence has been a menace of a monster to content with and he has showed signs of the late that he has returned to form. His passing is also a valuable asset to the Red Devils, being acres in front of both the Mexican and the Bulgarian striker. His partnership with Hernandez seems pretty strong. 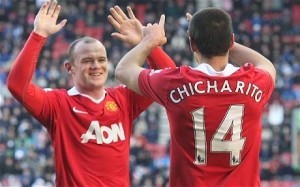 Perhaps can be described as the most consistent of the Manchester United attacking trinity, as he has knocked in 16 goals in his debut season, his 6 million pound move from Chivas USA seems to be an absolute bargain in exchange for 18 goals.

His movement is the most dangerous part to his attacking game, with him normally popping up at the backpost to knock in the goals for United. As once again, I shall bring up that his partnership with Wayne Rooney is really strong and can do damage to the best teams around.

Well, simply said, his form can be as indifferent as Diouf’s temperament, as the Bulgarian can have moments of brilliance whilst having weeks of being branded ‘useless’ or ‘lazy’ by his own Manchester United fans.

His skill with the ball is the most valuable asset for the Bulgarian, reason being that he has many flicks and ball control tricks in his attacking arsenal. More of the ‘one man show’ for Manchester United, reason being that he prefers to be up front on his own. Has knocked in many goals this season though. A lot of Manchester United, or even football neutrals will remember this.

One response to “Manchester United’s Striker Dilemma: Rooney, Hernandez or Berbatov? We’ve got the stats”